Know why Mandalay should be one of your Holiday destinations

Know why Mandalay should be one of your Holiday destinations

What better way to end 2016 but with an Asia travel adventure with your family? It can be tricky to choose from a lot of holiday destinations

but you can always start with a place you’ve never been to before. How about Myanmar? Let us take you in on a mini trip to Mandalay, Myanmar with everything you need to know from its attractions, must-try foods and a lot more of what this city can offer you.

Considered to be a relatively new city in comparison with the other cities in Myanmar, Mandalay was built in 1857 by King Mindon after the country’s defeat during the Second Anglo-Burmese War, as he was trying to re-establish the Burmese prestige.

Discovering the gems of the city can be done by walking through its busy streets since most of the markets, temples and restaurants are situated close to each other. However, if you are planning to go to some of its main attractions like Mandalay Hill, Shwe In Bin or Shwenandaw monasteries, you would need to hire a taxi or a pick up. Another option for travellers to explore this holiday destination is by renting a self-drive motorbike which will cost you K12,000. If you are feeling a little more adventurous, a hot-air balloon ride is the one for you, priced at US$275 per person.

Located surrounding a moat at the middle of the city, the Mandalay Palace, contrary to its polished look on the outside is actually hiding the damaging effects of the bombing during the Second World War on the vast land inside its walls.

A huge army camp, golf course and a reconstruction of the original palace can be seen within the walls of the Mandalay Palace. Relics and other old belongings are displayed in the museum, leaving visitors an impression of how the place used to be. You may buy your tickets for the museum at the east gate for $10. 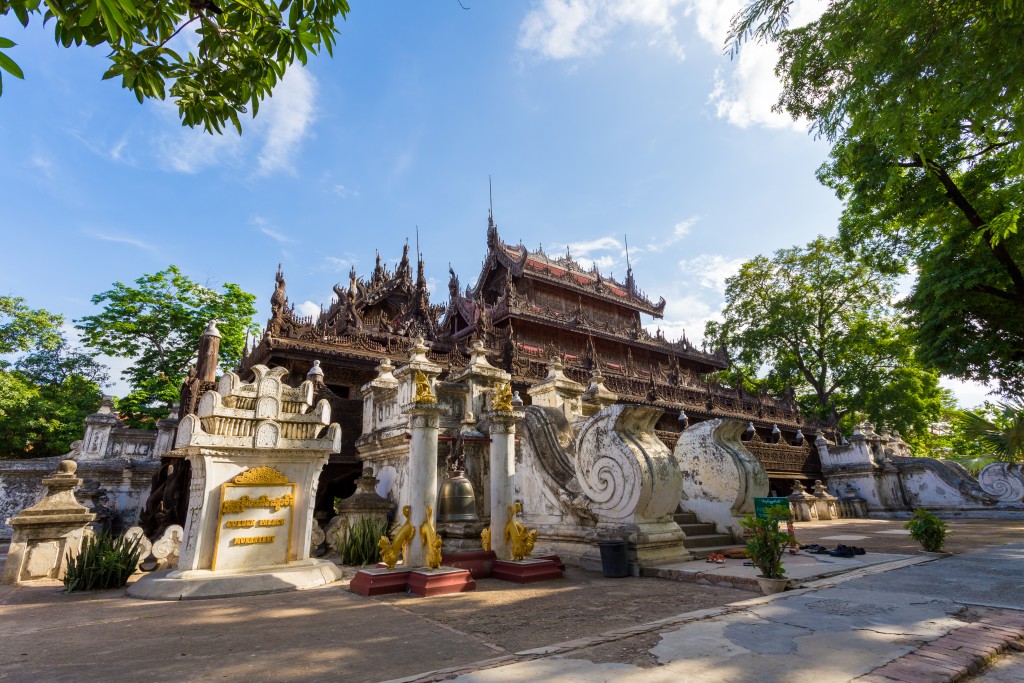 Unlike the Mandalay Palace, the Shwenandaw Kyaung monastery is a perfectly preserved structure, originally held as King Mindon’s apartment where he died. Now situated at the corner of 14th and 62nd streets, it used to be located inside the Mandalay Palace walls and was converted into a monastery by Thibaw, Mindon’s son and the last king of Burma. The Shwenandaw Kyaung monastery is made out of pure teak, also decorated with carvings that are beautifully designed.

Constructed by the Chinese merchants in 1895, the Shwe In Bin Monastery also stood the test of time. Stunning wood carvings and traditional artworks can be seen inside.

As this monastery is in the central Mandalay, going out you can observe Buddhist monks in their normal everyday lives.

Where Mandalay got its name, the Mandalay Hill can be your last stop once you’ve explored the city. Enjoy a beautiful sunset as this hill offers a 360 degree view of the whole city and some distant hills.

For the religious people, walking to the top of the hill is part of a glorious journey. In the 45 minute walk, you will be welcomed with two giant chintes. A pick up is available to bring you to the top and back down the hill as the weather can be hot during the day.

It’s been more than 2 years since we have adjust