Meet the Historic Town of Sukhothai

Meet the Historic Town of Sukhothai

A travel guide to Sukhothai will show you a wide range of temple ruins and historical sites explaining why Sukhothai is a UNESCO World Heritage City. Once you travel to Sukhothai and you set your eyes to the marvellous historical sites, you will understand why it is growing popular among travellers as a good place to go to.

The Sukhothai Kingdom during 1238 – 1438 was when the Thai art, language and architecture started. “Dawn of happiness”, the meaning of the word Sukhothai, was among peace and prosperity that believed to be exactly what the people felt before Sukhothai was annexed by the Ayutthaya Kingdom. Because it is located 427km north of Bangkok, there are not a lot of travellers here compared to Ayutthaya. But rest assured that Sukhothai’s ancient places are nothing less impressive.

Aside from the historical sites Sukhothai offers to its visitors, you can still enjoy the old and rural lifestyle of Thailand in this beautiful city.

One of the attractions in Sukhothai is its historical park that is 70sqkm big and has more than 190 historical ruins. In its epicentre, you will find Wat Mahathat that is considered as the spiritual centre of the kingdom. In the north side you can find Wat Phra Pai Luang, known to be the original foundation site of the Sukhothai Kingdom.

The early Sukhothai people had the same belief with the Khmer. And just like what the Mount Meru Concept suggests, temples in Sukhothai were placed where in the central prang is the tallest and the most notable of all. 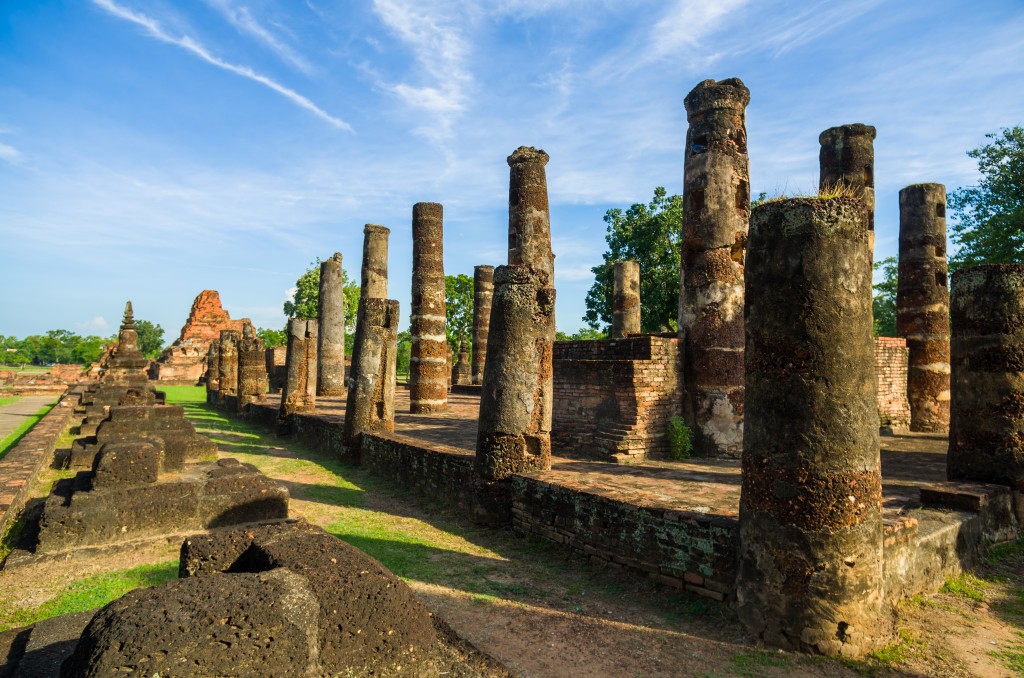 Because travelling is not complete unless you try what dishes the city can offer you, Sukhothai’s dining experience is a must-try.

Just like a lot of rural towns in Thailand, the best local foods in Sukhothai can be found in street-side stalls. Among the many mouth-watering dishes Sukhothai has, you should never pass on a chance to try the typical Sukhothai noodles dish made with the signature tom yam soup, ground peanuts and julienned bush beans.

Coming from other places in Thailand like Bangkok, you might expect the same level of energy and excitement in Sukhothai’s night life. But unlike that of the other cities, the Sukhothai night life is actually considered a spiritual activity. But no need to worry because if you are a traveller that wants to cool off with some beer after a day or wandering, Chopper Bars located near Sukhothai Historical Park offers cheap local beers and a good live band music.

If you like to discovering places that have a historical significance, and can offer you an array of tourist attractions, it’s time for you to book your trip to Sukhothai right now through Bangkok Airlines website and see flight schedules and details, as well as some special price air tickets available.

It’s been more than 2 years since we have adjust


Error: API requests are being delayed for this account. New posts will not be retrieved.